By Olivier Dupuis and Carmelo Palma

Vitaly Markiv, an Italian-Ukrainian soldier, was found guilty in the first instance of the homicide of photojournalist Andrea Rocchelli. However, the sentence is founded entirely on the identity of the accused, since a Ukrainian soldier is apparently fascist by definition. 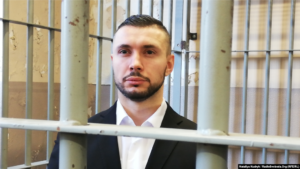 The appeal process is under way in Milan for Vitaly Markiv, the Italian-Ukrainian citizen and soldier of the National Guard condemned in the first instance for the homicide of Italian photojournalist Andrea Rocchelli and Russian dissident and human rights activist Andrei Mironov, and for the wounding of French photographer William Roguelon. Mironov and Rocchelli were killed on May 24, 2014 in a zone then occupied by pro-Russian separatists.

Markiv is accused of having played a determining role in an attack against “nosey” journalists. From his hilltop position, around 1800 meters from the target, he allegedly recognised the journalists and orchestrated the deadly attack while they were taking photos near a factory occupied by separatists.

The basis of the prosecution is an apparent extrajudicial confession made by Markiv to an Italian journalist, Marcello Fauci. Fauci’s conversation with Markiv was transcribed by Ilaria Morani for Corriere della Sera. The prosecution’s case comes directly from Morani’s article. However, Fauci himself evidently made no such assumptions of Markiv’s guilt, given that he continued to visit Markiv in hospital, even receiving help in obtaining a bulletproof vest.

From the interview it is understood that Markiv advised Fauci not to approach the conflict zone, referring to the deaths of Rocchelli and Mironov as an example of the danger, where heavy artillery was in use and battle lines had yet to be drawn, before the attack on occupied Slovyansk.

Asked during the trial about the article – where he was incorrectly identified as a captain – Markiv admitted to speaking with Fauci, but claimed it was the latter who notified him about the victims’ deaths. In any case, the Pavia prosecutor decided to see his warning to Fauci as an admission of guilt. Markiv was arrested on June 30, 2017, when he arrived in Italy to visit his mother in Marche, where he had lived for many years.

During the second trial, as in the first, it clearly emerged that for the prosecution, the civil lawyers, the National Press Federation of Italy, and the prestigious journalists who embraced the case against Markiv, the question of Markiv’s guilt was much less important than the declaration of his guilt, as a form of vengeance for Rocchelli’s death.

The Russian human rights association Memorial, of which Mironov was a member, established an international and independent working group to study the proceedings of the trial. They condemned the superficiality of the court’s analysis of the context in which Rochelli and Mironov were killed, the inconsistency of the evidence, and the dismissal of other evidence (such as an audio recording of Mironov saying they are caught in crossfire), and the exclusion of any investigation of the separatist camp. Clearly, for these friends of Mironov, any old trial is not enough.

The “logic” leading to the first sentence, and which, we fear, could lead to a second, is common to many passages in the history of judicial alarmism, where proceedings aim for exemplarity instead of justice, at the apparently irrelevant cost of violating the principle of presumed innocence and the reversal of the burden of proof.

This is exactly what happened in the Markiv case, as is evident in two separate examinations of the legal proceedings undertaken by the deputy public prosecutor of Genova Enrico Zucca and the English lawyer Wayne Jordash.

It is dismaying and shocking to see left-leaning political and intellectual circles strongly linked with the protection of human rights accepting a sentence founded on the demonization of the accused, rather than the (non-existent) evidence.

Markiv was found guilty because he was a fascist, and he is a fascist because he is a Ukrainian soldier, and all the soldiers of the Ukrainian National Guard are fascists by definition. This is the logic according to which the proof of the crime is the identity of the accused. Markiv is guilty because of who he is – a supposed Ukrainian fascist – not because there is evidence of his having committed the crime.

Moreover, if Ukrainian soldiers are fascists, then they are the bad guys, while the separatists are the good guys, aligned with antifascist, anti-ukrainian Vladimir Putin. The attack that killed Rocchelli and Mironov must have come from the Ukrainian side, because the Ukrainians are the bad guys, and the attack must have been premeditated, rather than the kind of accident that is all too common in warzones. Consequently, an examination of the scene (by then no longer a warzone) and technical evidence were not deemed necessary, while evidence supporting the defence (for example, the trajectory of the shell deduced from a photo of the car transporting the victims) was not deemed valid.

No need to prove that Markiv was where the prosecution placed him, or that he had the means to recognise the journalists from such a distance, or that he played a central role in coordinating the attack.

It’s all irrelevant, since the proof of Markiv’s guilt is Markiv himself, just like in the Sofri case, where the guilt of the accused was proven by the identity and political ideology of the accused. The true, plausible and easy case of the prosecution. We know this analogy won’t please anyone who supports the verdict against Markiv, but, even if ideologically contrary, it is the most pertinent example. In the grounds for judgement, the misrepresentation of the context was such that, in two revealing errors, Ukrainian soldiers are termed “Ukrainian insurgents”, and the conflict is not blamed on the pro-Russian secessionists, or Russia’s efforts to destabilize the country, but “Ukraine’s declaration of independence”, which in fact took place in 1991, long before the Maidan protests in 2014.

That Vitaly Markiv was always presumed guilty can be seen in the errors of the public prosecutor. There was supposedly intercepted audio of the accused admitting while under arrest that “we wasted a reporter”. However, a translation by the defence revealed that Markiv had said something entirely different, namely that “in 2014 a reporter got wasted, and now they want my hide”. Given that the accused had apparently “confessed” his crime to journalists (even if they didn’t realize it), wouldn’t he also have confessed in prison?

The entire legal process played into this ideological trap: even allowing as evidence a fake document published on a Russian propaganda website, alleging an organized plot to exonerate Markiv and deceive the Italian judiciary. Not to mention the OECD report presented as evidence of Ukrainian attacks against journalists, even though the report blames these attacks on pro-Russian separatists.

If, as we fear, the sentence will be confirmed – albeit softened – by the court of appeals, condemning a man for a crime he could not have committed even if he had wanted to, Markiv will not be the only victim, and the judges and prosecution will not be the only ones to blame. Instead of justice, an additional injustice was committed in honor of those killed on May 24 2014 in Sloviansk.

Markiv’s lawyer, Raffaele Della Valle, who famously defended Enzo Tortora and is ranked among the most authoritative legal practitioners in Italy, claimed that he had seen things during the trial he had never seen in his fifty years of professional life. If any glimmer of hope, however faint, can emerge from this frankly insane judicial process, it will be due to Della Valle.

Under rule of law, Markiv was sentenced in such a way that no person should ever be sentenced. Ultimately, the judgement seemed inevitable due to the sheer number of people allied against the defendant, who felt this was the only way to honor the death of their family member, friend and colleague.

Those of us who knew Andrei Mironov as a Russian democrat activist who fought so many battles with the Radical Party feel, like his peers in Memorial, that an all too convenient trial is no way to honor his memory, and that the three years already served by an innocent man are an obscene tribute to the memory of both victims, as well as an insult to justice.