High tensions between Greece and Turkey, chaos in Libya, the Syrian tragedy, annexation of the Crimea, occupation of the Donbass by Russia and its accomplices, state failure in the Sahel, Beijing’s creeping annexation of the South China Sea, the accelerating neo-Stalinist transformation of the Chinese regime, the proliferation of cyber attacks – all constitute threats to the security of the European Union.

At the same time, in spite of real political problems (the level of defense spending in its member states, the Turkish question, the USA’s shift in strategic priority towards the Pacific, etc.), the North Atlantic Treaty Organization continues to represent, with the armies of its member states and under American leadership, the central and essential component in the defense of the European continent. 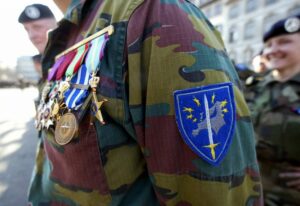 In his time General de Gaulle understood this well. As a virtuoso in the art of posture, in 1955 he wielded the policy of the empty chair within the institutions of the EEC. He did not go as far as leaving the other hated « thing », but in 1966 he brutally slammed the door of NATO’s integrated command while taking care not to question France’s membership in the Atlantic Organization.

However, while NATO remains the only real deterrent instrument, especially vis-à-vis the great authoritarian state that is today’s Russia, it is not well suited – and its name hints at this – to respond to security threats faced by the Union in its neighborhood and beyond.

These prospective data must be taken with the usual caution, and there is a distinction to be made between security policy and defence policy, which obviously does not exclude elements of porosity between the two. Nonetheless, conclusions must be drawn as to the adequacy or inadequacy of the responses given today and tomorrow to these two types of threats. In our view these conclusions make it undeniable that the Union needs a genuine European security policy.

It was true at the beginnings of European integration with the creation of the Coal and Steel Community at the initiative of Schumann and Monnet, and when the single market was launched during the Delors years, and then the single currency at the turn of the millennium – today too we must face facts. In terms of European security policy, at some point we can no longer be satisfied with « progressing towards the creation of a true European army » 1 as the Spanish Prime Minister Pedro Sanchez put it. If such ambitions are not to remain pious hopes, they must materialize into a precise, concrete, tangible objective. In other words, the Union must have a common instrument: a common European army.

The central question is therefore to understand where to find – behind the fine declarations – the last pockets of resistance that prevent the implementation of such a policy, this new pooling of sovereignty – one crucial for the future of the Union and its member states, and desired by a large majority of the Union’s citizens. 2

Here are some of them, the main ones in our opinion, in order of increasing importance.

Many argue that the United States – and with them the British – would never consent to the emergence of an autonomous European army, even if integrated into NATO. The few prospective figures mentioned above, as well as the healthy Anglo-Saxon pragmatism, lead us to believe the opposite. In fact it is already the case. For instance it is no secret that the Americans are very comfortable with the French army’s assumption of responsibility in the Sahel. There will undoubtedly be some concerns, even some reticence, particularly in the North American arms industry. But America’s challenge in the Pacific is of such magnitude that there is little doubt that such resistance would not stand up to those in Washington who consider that a stronger European ally would be useful, including in the Pacific region.

For a variety of reasons, a number of member states in the north and east of the Union fear that such an initiative would weaken the USA’s determination to defend them. They thus tend to see any initiative in the field of security as a red rag, thereby mixing up different objectives, confusing « common European army » and « single European army », security policy and defence policy. If, as we believe, these countries consider their membership in the Union as an important factor of security, complementary and not competing with their membership in NATO, they should not be indifferent to the political and military strengthening of the Union.

Untapped opportunities for participation in major European aeronautic and defense projects, along with opportunities withheld, have ended up creating a form of Anglo-Saxon tropism in Italy’s political class and major defense companies. Indelicacy – to put it mildly – on the part of recent Italian governments towards other member states has provoked, in our view, unwelcome retaliatory reactions 3 5 , exacerbating a situation that is not inevitable nor one where there is any intrinsic incompatibility. Moreover, it would be politically risky for other EU members to ignore Italy in such a vital area as security policy, simply on the grounds of the country’s current political weakness and the anti-European leanings of much of its political class (including the Five Star Movement on one side, and the League and the Brothers of Italy on the other).

While waiting for a better politics to emerge, Alessandro Profumo and Giuseppe Bono 4 might represent valuable, and in a way « institutional », interlocutors with whom to explore these new scenarios.

The German Chancellor was long a faithful exponent of German mercantilism, a mercantilism tinged with perpetual Kantian peace. It took the annexation of the Crimea and the occupation of the Donbass by Moscow and its accomplices for Angela Merkel to begin to measure the importance of the Union as a political reality and to become aware of its strategic weaknesses. Indeed it is above all to her that we owe the European response to Russian aggression, even if it was insufficient. But, as her stubbornness in the Nord-Stream 2 affair shows, this more political approach is always mixed with a robust mercantilist attitude, preventing her from proposing to her European partners a sharing of sovereignty in security policy. In her defense, there are the three French rejections of German ideas: Kohl’s proposals on the sharing of the nuclear deterrent in 1988, the Schäuble-Lammers initiative for a political union of the countries of the heart of Europe in 1994, and the Fischer proposal for a European Federation in 2000.

The « confetti of empire », according to General de Gaulle’s formula, have mainly helped endow France with the second largest exclusive economic zone (EEZ). Some of those territories, by virtue of their strategic location or the wealth of the sea surrounding them, should also be a subject of serious strategic discussion for the EU, not only for France – whether or not they are formally integrated into the European Union.

Some analysts consider that certain American bases in the Pacific might end up being coveted by an Asian giant and they wonder about the medium-term capacity of the United States to defend them. There is no doubt that the same could be true for some of the French territories in the Pacific and Antarctic.

The nuclear deterrent being obviously inoperative in this case, it is difficult to see how France, equipped with « half an aircraft carrier » 5 to use Valéry Giscard d’Estaing’s formula, might face a hostile power. Such a power could be closer or even much closer geographically to the coveted territory, with a much greater naval capacity and the experience of transforming, in defiance of maritime law, rocky reefs into new islands and military strongholds.

What would then become of the solidarity clause which stipulates that « If a Member State is the victim of armed aggression on its territory, the other Member States shall have towards it an obligation of aid and assistance by all the means in their power (…) » 6 in the face of the annexation by a superpower of an island or, a fortiori, of an uninhabited islet or reefs located more than 10,000 kilometers from Brussels? It is not difficult to imagine the reticence of certain EU countries and their public opinions. Such an event might have devastating effects on the cohesion of the Union, and even on its very survival.

On the basis of these and other considerations, a small group of people from military, diplomatic and political circles (some of whom, for professional and institutional reasons, must remain anonymous) has drafted a proposal for enhanced cooperation aimed at creating, alongside the armies of the member states, a common European army.

This proposal is based on two guiding ideas:
– full institutional and political integration of this army into the current institutions of the Union, with the European Council acting as the Security Council of the Union, empowered to authorize the deployment of the common army on a proposal from the President of the Commission
– the exclusion of the option of coordination or integration of segments of national armies in favor of the option of creating ex-nihilo a common European army composed of European officers and soldiers

You can read the proposal for enhanced cooperation here.

Translated from the French by Harry Bowden | Voxeurop

5 thoughts on “European security: an abiding illusion and the needs of our time”