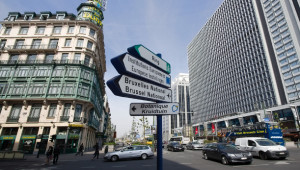 Our intention here is not to dig into everything that has contributed to the rise of populist movements on the right and left in several member states of the European Union: unemployment, social downgrading, precariousness, globalisation, immigration, terrorism, the aging population, and so on… After all, none of these factors tells us anything about why Europe has become a scapegoat, not simply by populist parties, for all these questions which European countries and the European Union are barely able to respond to.

Our firm belief is that powerful forces are at work under the cover of populism, in all of its European manifestations, beyond and within the various lands where it is flourishing. For several decades now these forces have been feeding populist movements and feeding off of them.

Frequently made up of veritable castes, these forces consciously or unconsciously see themselves as the downgraded classes of tomorrow, and often with good cause. So with all their might, they hold out, and are prepared to do anything, even to engage in the worst kind of politics, just as at other tragic moments in European history. They’ve found their banner in discrediting the European project ad nauseam; they’ve found their enemy’s enemy in the populist parties that carry the banner; and they’ve found the best way to protect their power and the comfortable income they consider a right by splitting it with them. As women and men of the world, their tune is low-key and their preferred weapons are inertia, obstruction and bogus good ideas.

The hard core of this anti-European reaction dwells in the muted corridors of the diplomatic corps of the Member States of the European Union. They are formed in the same moulds, steeped in common rituals, well known to each other through their frequent meetings, hobnobbing at the countless cocktail parties and get-togethers that pepper diplomatic activities; they are galvanised at the summit of the great pyramid of European affairs that is made up of the General Affairs Council and the Committee of Permanent Representatives in the European Union (Coreper) in Brussels; they are bearers of a widely-shared vision of their function and future. This European « army » of over 100,000 men and women represents the most compact, and as a result, the most powerful force in the process of denigrating and sabotaging the European project.

But this has not always been the case. For many years, our diplomats could be proud, and often rightly so, of being at the vanguard of European integration. It is of course true that this position was also very convenient to them, for they were able to reinforce their own powers at each step of the Europeanisation of ever-widening sectors of economic, social and political life. But the times have definitively changed, and today the future of Europe depends largely on Europeanising important parts of their expertise and prerogatives.

Our diplomats are perfectly aware of this. Just as they are aware of the increasingly undeniable gap between the role that each of the Member States of the EU, including the largest among them, purportedly plays, and the one that they actually play in the great game of international relations.

They could have tackled the gradual emergence of a Europe of Foreign Affairs and Defence. But they have preferred to protect their ongoing prerogatives, privileges, habitus; they have consciously opted to torpedo any attempt at even partial Europeanisation of their authority. As in other historical contexts, diplomats of the stature of Saint-John Perse are not legion. Three examples from among many serve to illustrate this.

In 1995, seven Member States of the European Union signed the Schengen Agreement. Two years later, during the negotiations for the Treaty of Amsterdam, the protocol for its application and the regulations pertaining to it were introduced into European Union law. Twenty years later, in 2016, with twenty-six Member States now a part of this zone of free circulation, the EU still does not have a common consular body.

The disaster in Hungary, Poland’s misguided actions, and now Brexit have simply brought to light what was clear all along, namely that the European motor needs a gear box. With at least two gears: one for Great Europe, the Europe of the four freedoms which no longer has room for the idea of « an even tighter union »; and one for a Europe that is tied to a common currency and to completing economic and fiscal integration, on the one hand, and to constructing foreign policy and common security on the other. Our diplomatic corps were in prime position to understand this, and it was their responsibility, and the responsibility of our politicians, to ward off the sad scenario we are witnessing today. And that is still the case. Nevertheless, judging by the drooling desire that some of them have to grab the eventual spoils of the City and transfer them to Frankfurt, Milan or Paris, or by their attacks against the use of English in the European institutions, we are forced to admit that these small-minded, national behaviours still seem to prevail, at the cost of European interests.

A short time ago in Bratislava, we were told that Europe had taken important decisions concerning its security and defence. Unfortunately, the reality is quite different. The only future for that initiative, like all previous ones, is to endlessly foster illusions. Who knows better than our diplomats, who have been at the heart of the process of European construction from the beginning, that in order to work, an initiative on integration must satisfy certain conditions regardless of the domain in which it is formulated: i.e. management by an organism that is independent of the States (the Commission); genuine decision-making mechanisms (undoing the rule of unanimity); a definition of priorities and a control over the actions of the Commission by the Council (the States) on the one hand and by the citizens (the European Parliament) on the other; and, last but not least, a clear objective that is transparent to all.

Looking closely at it, the recent initiatives concerning European defence policy do not satisfy any of these criteria. The objective is severely limited and completely unintelligible to the citizens. Its key objective – the creation of battle groups – is nothing but a sham. Such forces already exist (Eurocorps, in particular) and they have almost never been deployed, precisely because of the absence of any legitimate and efficient political institutions that could decide upon and politically manage their use.

Obviously, however, our diplomats are not alone in this great and learned effort to sabotage European construction. They can count on firm allies, chief among them the array of national arms industries that are highly protective of their exclusive domains, deeply attached to their rightful incomes, and often comfortably ensconced in the practice of socializing the costs of marketing and research & development and privatising their benefits. These forces have no need of a spokesperson. They have every right to count on a vast army of journalists who would be downgraded in power and downgraded full stop by any genuine « transition to Europe », with everything that that entails in terms of investigative journalism, deciphering European stakes and serious European parliamentary and institutional chronicling.

And what do we see standing opposite this powerful “coalition of the (un)willing”? A political class without a plan, with no political line, navigating by sight, day by day, subordinate to the powerful coalition of constitutional bodies, reinforced by a few phalanxes of useful idiots, including some heralds of the European cause, a few over-excited individuals sitting before a reheated dish of “battle groups”, others succumbing once again to the sirens’ call of such perfect models as the United States of Europe or the European Republic.

Naturally, this coalition has other allies too: in the banking sector, which continues to maintain a strong national character; in other sectors of high-level State administration; in the large industry that owes a great deal of its prosperity to rubbing elbows with the highest spheres of government. But if we continue honing our analysis, we risk losing sight of the operational nucleus of this great reactionary force that is permeating every member country of the European Union, to different degrees and in various guises; or as Clausewitz would say, we risk not fully understanding Europe’s true enemy.

If this assessment is correct, then certain conclusions necessarily follow. The first thing to do is to give control over the European legislative process to the governments of the Member States, and thereby also to their respective parliaments. It is of paramount urgency, once and for all, to free the representation of the States within European institutions from the grip of national diplomatic structures. In order to do that, our utmost priority must be to politicise and institutionalise the current Council (of Ministers), by turning it into a true institution, into a European Senate, that sits in Brussels each week with public debates, reports, resolutions and votes.

But of course we also have to keep in mind the balance of powers among the three institutions: the question of the European executive’s legitimacy and strength must also be one of our top priorities. To be consistent with the bicameral nature of European representation, strengthened by the affirmation of this European Senate, we also have to recognize the impracticability of the current situation, where only the European Parliament is in charge of designating the executive, and opt rather for a presidential system where the President of the European Commission is elected by universal suffrage.

Lastly, as far as European integration in the area of defence is concerned, we absolutely must recognize that there is a minimum threshold below which any such initiative is perfectly illusory. This threshold can be defined with respect to three criteria: a genuinely common implement (a common European army composed of European officers and soldiers, and not a conglomerate of national contingents); a single supranational political authority that is responsible for the common implement (the President of the European Commission, assisted by an ad hoc commissioner); an authority endowed with the highest political legitimacy that is charged with ratifying the decision to employ the common implement (the European Council of heads of state and of government of the interested countries as established in a High European Council for Security).

Make no mistake, the diplomatic bodies of the Member States and the defence industry blocks are well aware that a serious advance in the question of common European defence would mean irrevocably establishing a genuine common foreign policy, the progressive constitution of a common diplomatic corps, and a common defence industry, and therefore an end to the little (and not so little) agreements among the former and the latter, at the expense of the interests and security of Europe and of its citizens.