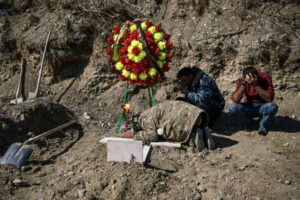 For the EU and its member states to take such a position is politically untenable and morally unjustifiable. There are various reasons for this:

The Atlantic democracies and the European Union should understand that the « Erdogan problem » is their problem even when Turkey’s nationalist agenda moves outside the Mediterranean basin. The more the Turkish president expands his international influence, the more he exacerbates the problem that Turkey now represents for NATO and the EU.

For these reasons, and in order to create the basis for serious negotiations between Azerbaijan and Armenia, there is no alternative but to recognise the independence of Nagorno-Karabakh.

Only on the basis of such a recognition will it be possible to find a compromise – inspired, for example, by the Goble proposal of the 1990s – which might ensure territorial continuity between Azerbaijan and Nakhichevan on the one hand, and between Armenia and Nagorno-Karabakh on the other, and which might create the security conditions that would enable Armenia to return the currently occupied Azerbaijani districts around Nagorno-Karabakh to Azerbaijan.

It goes without saying that such international recognition of Nagorno-Karabakh could only help in breaking with the post-1994 status quo, and could only be a means of halting the current war, if it were the joint act of many democratic countries and, in particular, of the United States and the member states of the European Union.